Jordan Ross in 2016 with two of his babies: his youngest child, Miles, in the carrier, and the recently opened Roasting Room. PHOTOS COURTESY JORDAN ROSS

Seven weeks ago, Jordan Ross never thought he’d be uttering those dreadful breakup words to his friends in the Lowcountry. As passionate as he’s been in planting roots in Bluffton for 10-plus years, 10 generations worth of roots are calling him home.

“This wasn’t even on our radar two months ago, but it’s a pang we had to listen to,” said the founder of The Roasting Room, the music venue above The Corner Perk that has turned the corner of May River Road and Promenade Street into a destination for musicians across the Southeast. “It was tough to tell folks that I need to go, but the folks I’ve told, they know this is something we need to do.”

If you have seen Jordan Ross on stage over the past 11 years – as a solo act in Sea Pines, as a worship leader at Church of the Cross, or as the hustle and brains behind The Roasting Room – you quickly realize that family is everything to him.

From the day he and his wife, Ali, moved to Bluffton in 2009, Ross has been a people magnet, a community builder, and a dream achiever. Seven weeks ago, a new dream emerged via an unimaginable call from his Mom.

“My grandfather, one of my idols, he went from mowing the lawn to doctors finding a brain tumor the size of a peach to him being dead, all in two weeks,” Ross said. “He was an icon in our town of 1100 people, a school teacher, the commissioner of the high school sports conference in the area. And he and my Grandma worked a 100-acre farm through the years. He’s maintained a seven-acre plot for a 150-year-old farmhouse. I’m the oldest grandchild, and my family wants to keep the farm in the family.”

It was a tug at the heart strings too forceful to ignore. So Ross is putting his Lawton Station home on the market and planning a transition from music promoter to hometown farmer.

Ross moved to Savannah out of college in 2007. Ali got a job in the school district and Ross set out to build a music career.

The couple quickly realized Savannah was not their vibe. When he started earning gigs up the highway on Hilton Head Island, he just as quickly knew Bluffton was his true destination.

“We had an ideal in mind, a place to find community, to build community, to make a difference, to plant roots and raise our family. Bluffton delivered on every part of that wish,” Ross said.

After buying a house here in 2009, the couple joined Church of the Cross and quickly became friends with Josh Cooke and Trevor Harden, the church’s worship leader. When the church band needed a utility player, Ross was the man on bass, drums, guitar and congos.

“Whatever they needed, I said, ‘I got it’,” he said. “Josh and Trevor and their families, they became family for us immediately.”

He witnessed Cooke chase a dream in opening a coffee shop in a cramped space on Burnt Church Road. Harden was just as daring, launching his own studio and marketing agency. When Cooke decided to go all-in on building a new home for The Corner Perk in The Promenade, Ross was ready to push his financial chips to the middle of the table as well, to make the upstairs space above the coffee shop into a music room.

“I always wanted to be a traveling musician but I didn’t want to be away from family,” Ross said. “So I figured, ‘Hey, let’s bring that world to us and share it with all our friends.’”

It being in his family DNA, at least he’ll know more about farming than he did about launching a music hall. He’d earned a following on stage here, but he knew nothing about being a music promoter.

“I think I sent emails to every booking agent contact I could find when we were opening, selling them on this little hamlet that’s Bluffton, and on this dream,” Ross said. “I knew nothing about contracts, about the ins and outs of working with artists, but I knew what I wanted this space to be.”

In five and a half years, Ross has been tireless in drawing talent, from locals like Jevon Daly and John Cranford to Grammy-winning artists, to Old Town with the promise of an intimate setting and a second-to-none performance space, a 75-seat listening room. The Roasting Room launched with Ed Roland from Collective Soul and Angie Aparo on opening night, Dec. 4, 2015.

“They were big gets. Angie is a long-time friend and Ed is just amazing in believing in us,” Ross said. “I wanted to get this one artist, Gabe Dixon, who I knew would be perfect for here. And his agent, Seth Meganck, he just believed in me. He listened, he mentored me, taught me the ropes of the business. He told us we had the best space in the Southeast and he made sure everyone knew it. That belief, that help, it was everything.”

Ross has been equally tireless in attracting local talent to help build the business and has earned a loyal crew of believers over the past five and a half years.

“It began with Isaac, he saw an ad, showed up and just dove in to making the sound perfect. James, Lauriel, Amanda and Dustin and Michelle. And of course, Josh. These people, they are family. They are the dream,” Ross said. “This is all about people. You miss people, you miss the point.”

Ross and Cooke want to make sure people know The Roasting Room is not going away. COVID has dealt a blow to the live show world and Ross said he and his crew hung on barely throughout 2020, like Bill Paxton and Helen Hunt clinging to a house pipe in a tornado in “Twister.”

“We’re back and the lineup for this fall  is stronger than ever,” Ross said.

When Ross delivered the news to the team, Cooke took the news hard.

“That’s my brother there. He’s just amazing. Our families have become inseparable. It is a seismic loss, but to know Jordan, you know this is a ‘must’ move,” Cooke said. “He’s all-in on people, and family above all, period.”

Cooke met with the team and decided how to move forward as Ross plans an early to mid-2022 full exit. Both Cooke and Ross are confident they have the behind-the-scenes rock stars to carry The Roasting Room to bigger successes.

“This is just the first chapter of the story. I’m proud to have been the lead writer, but Isaac is lead engineer now, Dustin has shown he wants to run the production end, so we have a great base,” Ross said. “This has never been a big profit center. This is more about passion, not money. But this crew, they can make money through loving the music and making it their dream.”

Cooke said replacing the maestro behind the dream is an impossible ask.

“Jordan did everything. His impact was everywhere, every facet of what’s built this place’s reputation,” Cooke said. “But it’s a spot where you give other folks the room to shine and see who steps up. In time, we’ll offer them true ownership in the business. We’ve been so blessed to have this core of mini-Jordans in the making. I’m excited to see what’s next.”

Ross is in full agreement.

“I learned how to make posters on the computer. You want something, you find a way. But between the church and family life, I never had the bandwidth to fully realize this place’s potential,” he said. “This crew, they have shown just since I told them my news that they want this. They want this to be their everything.”

Ross somehow carved time out over the past few years to earn his pilot’s license, a skill he hopes to put to good use in traveling from Rockford, Ohio, to Bluffton in the future.

“Am I a farmer? I’m excited to find out. I can’t wait to coach my son’s baseball team, to work with livestock,” Ross said. “We’ll be the big-city folk for a bit – there’s no DoorDash in Rockford. There is an airport with a runway big enough for me to take off to Bluffton. You get one shot at this life. I swing big. When I’m old enough to slow down, I want to have no regrets. That’s what I want to model to my kids. But you’re not getting rid of me. Bluffton will always be family.” 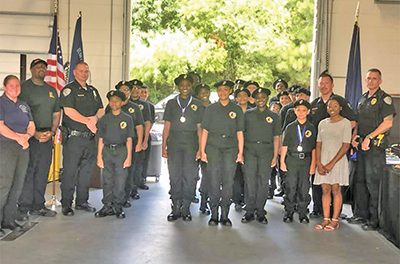 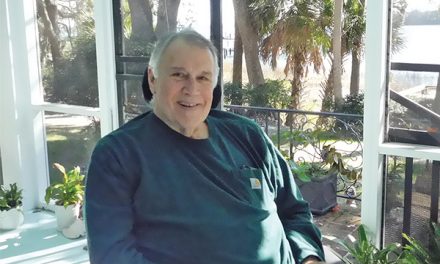 For restaurateur, cooking won out over a degree in English