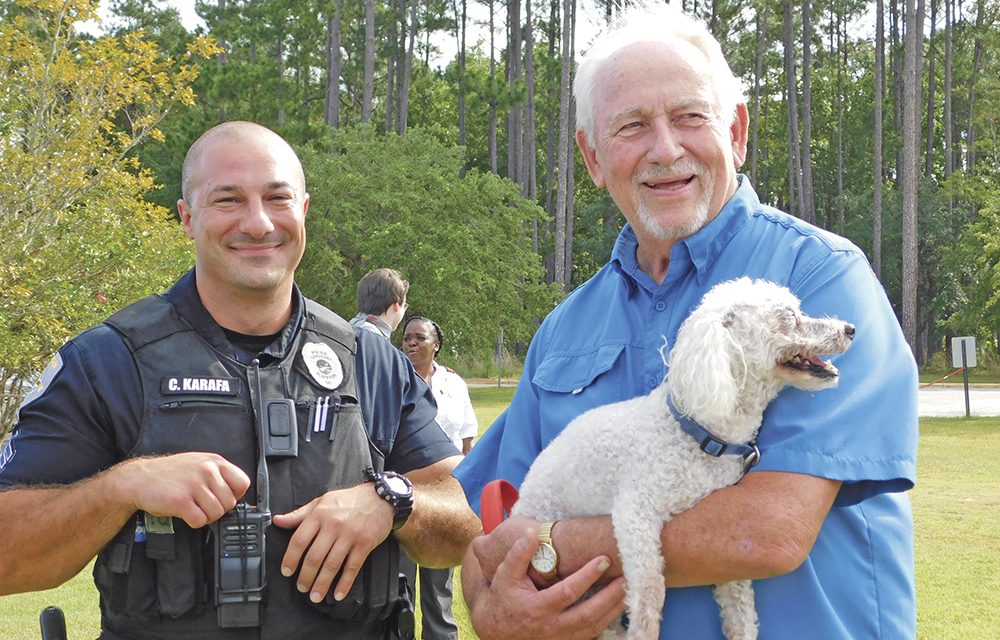 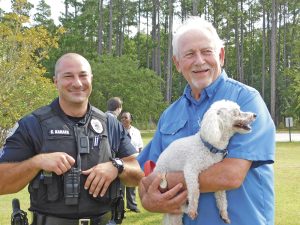 Wayne Teague and his dog, Beau, were reunited Aug. 5 with Sgt. Craig Karafa of the Bluffton Police Department. Karafa was the first person to respond to Teague’s location when the Sun City resident was reported missing June 18. PHOTOS BY GWYNETH J. SAUNDERS

That rascal Beau got out again!

The little white terrier mix slipped past owner Wayne Teague and led a merry chase through the woods behind their Sun City home June 18.

On Aug. 5, the 81-year-old Teague had a chance to thank the folks who initiated emergency services as they all gathered on the soccer field at the University of South Carolina Beaufort, including the helicopter and crew.

As the rescue groups arrived, Teague was re-introduced to one very special first responder: Sgt. Craig Karafa of the Bluffton Police Department.

He had been off duty that afternoon but nearby when he heard the distress call over his radio, answered the call and was the first to arrive in the area.

“You look a little different today, a little bit better,” Karafa told him.

At the start of this experience, Teague went after the canine escapee in the early afternoon. After more than an hour’s absence, his wife, Phyllis Gribbs, was concerned that he had not returned.

“My biggest fear was he had fallen or something because I know he cannot take heat,” Gribbs said.

Teague, meanwhile, found Beau sitting in a little water at the edge of a drainage ditch near the powerline right-of-way.

All he could see was the dog’s head, and thought he was sitting in shallow water. Teague bent down to pick up his mischievous pooch, but gravity ruled.

“Suddenly, I tumbled in,” he said.

Teague was shocked to find the mud was over his ankles, the water was waist-high and the embankment was at his chest.

“There was nothing to hold on to. So, for 45 minutes, I’m going back and forth looking for something to grab onto,” he said.

“Finally I found probably a tree trunk or something. I managed to get across the ditch, and I got up using that,” Teague said. “But you know, when your foot’s stuck in that mud, picking one foot up doesn’t do any good.”

Teague was about 60 feet inside the tree line and managed to walk out of the woods to where there was grass under the powerlines.

“I couldn’t move. I just lay down. And that’s where I was,” said Teague. “My sneakers and my socks are still in there somewhere.”

A neighbor called emergency services and Sun City security at about 2:45 p.m., according to reports.

That set into motion a chain reaction of responses from several first responders.

After the helicopter made several orbits over the general vicinity, the pilot guided Karafa by radio to Teague’s location.

The first thing Karafa had to do was navigate a 6-foot fence with barbed wire – which he ultimately hopped over.

It turned out Teague was actually not far away from his own home. After a quick assessment, the sergeant contacted Jasper County emergency services.

He was taken to the Tidewatch Free Standing Medical Department where he spent the rest of the day under the watchful eye of the medical staff.

Later, he was transported to Coastal Carolina Hospital, where he spent the next two days.

“I was physically exhausted, I guess. Probably dehydrated. So they took vials and vials of blood. By Sunday night, I wanted to go home. My arm would not give one more vial, but they said you have veins in your ankle,” Teague said. “They wanted to make sure I didn’t have a heart problem. And it was a good thing I didn’t take in any water when I fell.”

Teague did have a few thoughts as he lay there hoping someone would find him.

“I was really struck when I was in that ditch, because you know the gators had been known to wander through the ditches,” he said. “You see something floating in the ditch wondering if it’s a gator.”

Joe Schetting, chief of security at Sun City, said he couldn’t be more proud of the whole coordination.

“My supervisor knew when the wife called that this was more than a routine situation. This is another great example of coordination between Securitas, the sheriff, Jasper County and Bluffton police,” he said.

Baxley said at the gathering that the helicopter had caught a lot of bad guys, but this was the first time it had been used to save a life.

Teague said there was one thing he made sure to do after the whole experience was behind him and he was home: “I walked into Joe’s office and I said, ‘Too many people complain. I want to say thank you.’”

It was an emotional Teague who expressed his appreciation at the gathering for all the efforts of the first responders involved and their coordinated teamwork.

“It wasn’t like they got me up and I walked away. I really had no thought process when they showed up. I was just happy,” said Teague. “Everything worked out in the end, but it was scary.” 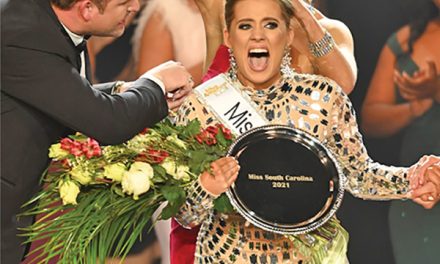 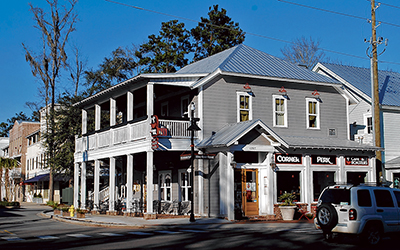 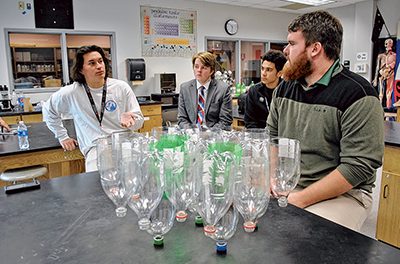 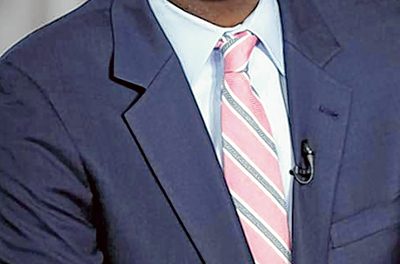