In fantasy football, it’s all about being the legend of the fall 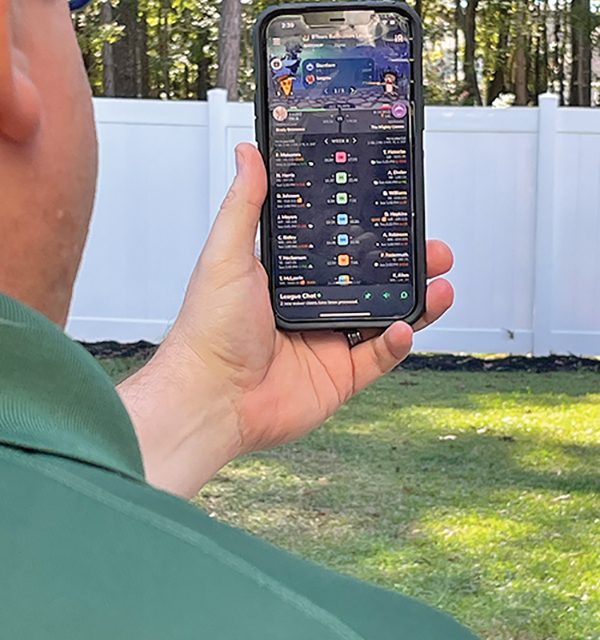 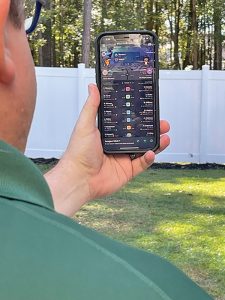 The author checks his lineup from the patio, as his wife and kids have prohibited off-day app checks.

Once a game seen as a refuge for stat nerds, fantasy football has become a mainstay among the mainstream, spawning a billion-dollar industry with more than 80 million players in the U.S. expected to field a team in 2021.

Dr. John Aita is a Lowcountry microcosm of the fervor behind the fever that is fantasy football.

“The draft day in my leagues is the adult Christmas Day,” Aita told me during a recent visit to Bluffton Family Chiropractic. “It is a day filled with possibility, hope and unadulterated joy.”

I share John’s excitement. I’ve been playing fantasy sports since I was a teen copying stats out of the USA Today Baseball Weekly. Oddly enough, it is the nerds that have made the ‘sport’ far more accessible to the masses.

Between instant access to stats that exploded in the 1990s and a bevy of apps that make playing GM of your team as simple as texting, the barriers stopping folks from giving fantasy football have all but been eliminated.

“I have so many friends that mocked me 25 years ago that now hit me up every fall to ask if there’s a spot in my league,” said long-time player and recent Bluffton transplant Jason Tubbs. “For me now, it’s like Facebook combined with sports. All my friends have gone in 20 different directions, but this is a spot where we can reconvene each year, catch up on our lives and talk endless trash about each other’s teams.”

I ran a local league for years, before I moved away and came back. We got many of the old bandmates together for a league this year, while adding new friends from the What’s Happening in Bluffton Facebook group.

ESPN and Yahoo had a monopoly on the fantasy market for years. Commissioners would have to pay a yearly fee to run the league through their service. Now, all the sites are free (diehard players now spend that money to pay experts for lineup advice) and there are many more players in the space.

We used the Sleeper app this year, as I’ve tried it out in other leagues and found a much simpler user interface and a number of options that create cool challenges for the league members.

One of the many complaints during my multiple stints as league commish through the years is that I like to make things too complicated. When it comes to tech and sports, guilty as charged. It’s a bit of an addiction.

Back in the early days, most leagues operated by giving points for each stat category included in the league (for baseball, the base stats were homers, RBI, team batting average, total steals, total pitcher wins, total pitcher saves and a stat called WHIP (walked and hits allowed divided by innings pitched). If you were in a 10-team league and you led in homers, you’d get 10 points. The last place team would get 1 point. Tally your points among all categories to find out who wins your league.

The stats and tech explosion led to head-to-head play being possible. In fantasy football, your players all earn points for all the different feats they accomplish in a game. The team with the most points in the head-to-head matchup gets the “win” for the week. That’s why your mate is often glued to a smartphone screen throughout from 1 p.m. Sunday through the end of Monday Night Football. The head-to-head points are updated instantaneously when running backs, receivers, quarterbacks and defensive units make plays on the real-world field.

“I used to say that my biggest struggle after draft day is getting free agents that other teams haven’t taken after each week,” said Bluffton fantasy football addict Yves Michaels. “Now, it’s keeping my marriage intact from September through February. I know I only get so many Sundays I can be sitting on the couch watching NFL Redzone and tracking stats. Then I get a couple Sundays when I can go out with friends to watch games and suffer together as we watch our teams succeed and fail. The rest of the Sundays, I have to make sure no matter what activity we’re out doing, there has to be strong cell service or Wi-Fi so I can track my team.”

It sounds nuts, we know. For a long time, when mates referred to themselves as football widows, it was purely wives speaking.

Over the past 10 years, the fantasy player makeup has shifted from less than one percent female to just over 23 percent in 2021, according to industry estimates. We have four women among the 12 owners in one of my leagues. (Oh, did I mention I’m in four leagues myself this fall?)

“I’m the football widow in the relationship now,” said Hilton Head Island resident Chris Aiken. “I used to play in six leagues at once but I had to give it up. And now, my wife has gone from hating it to playing it herself. Now, she’s the one trying not to get addicted.”

This is rarely just for fun and games. Most leagues have an entry fee and there is a payoff for the winner (or so I’ve been told; I wouldn’t know anything personally about these pay-for-play leagues).

And a new kind of fantasy has further grown the player base. Daily fantasy sports allow you to make daily and even in-game lineup changes to maximize your points in an effort to win real money – at times, upwards of $1 million for certain contests.

I can’t do that. My niece is amazing at DFS, like a card-counting savant at a blackjack table. Me, I know I’m already walking a fine line between fun and addiction. That, and I tried it a few times and I stink at it.

Not that I’m any kind of prize playing fantasy football. I’ve won a couple titles through the years, but I am often the butt of jokes in Alan Arseneau’s league. I swear that the man I call the unofficial mayor of Bluffton hexed me long ago during a draft at the former Beef O’Brady’s and that voodoo curse has never been lifted.

I added a wrinkle in our local league this year, utilizing a Sleeper app feature that gives an extra “win” to each owner that scores above the league median each week. Stupid, stupid me. I’d be leading the league without that idiotic change.

The trash talk and instant rivalries and blood feuds among our players is what makes this game so fun for me. Though interesting enough, players clam up when it comes to sharing information about potential pickups – or wanting to comment publicly about their teams for this article.

Turns out, superstition runs rampant among fantasy players as well. The league leaders are on streaks and don’t want to mess with the shine of the fantasy gods. (Sadly, Dr. John is in “wait until next year” mode in our league and less superstitious about public comment. Luckily, he’s in one other league – that I know of.)

We haven’t crossed the midpoint of this season, though it’s going ridiculously quick. And so I’m sorry in advance to my incredibly understanding wife. Trade deadline is coming up in the next couple weeks. And if I make the playoffs in any of my leagues, I know I’ll be unbearable.

And for that, I apologize. Oh, I also apologize for the whooping I think I put on Dr. John this week. I wrote this before the Week 7 games. If you see me around town pouting and sulking, it’s because the fantasy gods punished me for such hubris. 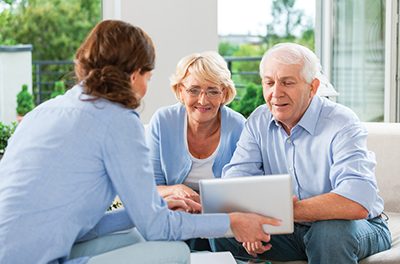 Understand healthcare power of attorney vs. living will

Palmetto Electric's Give 5 program allows members to help others