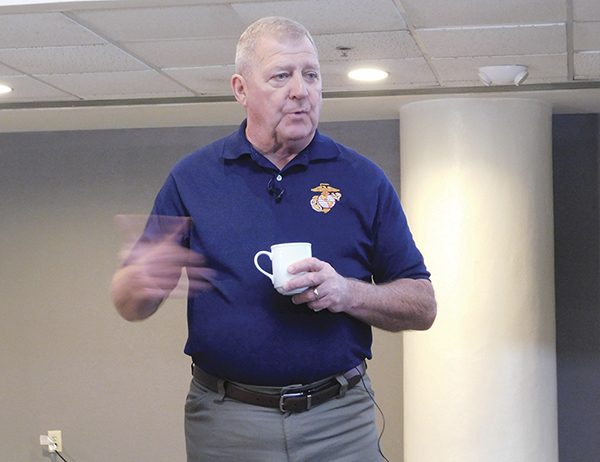 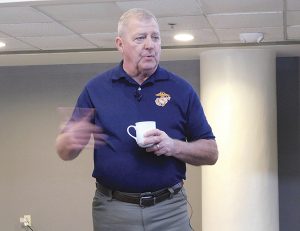 Retired Master Sergeant Jerry Ensminger speaks at a town hall-style meeting on Hilton Head Island about how those exposed to toxins at Camp Lejeune Marine base might pursue claims for themselves and family members.

It is no longer news that U.S. Marines and others were exposed to contaminated water if they spent more than 30 days in certain parts of Marine Corps Base Camp Lejeune, North Carolina, between Aug. 1, 1953, and Dec. 31, 1987. At least 20 specific diseases – most of them various forms of cancer, as well as Parkinson’s disease – and cardiac and neural tube defects have been attributed to the exposure.

On Aug. 10, 2022, the Honoring our Promise to Address Comprehensive Toxics Act (PACT) was signed into law by President Joe Biden. It covers numerous situations that exposed military personnel, their families and civilians to hazardous conditions stateside and around the globe.

For many Marines, this act also includes a provision known as the Camp Lejeune Justice Act of 2022 (CLJA). It specifically provides for those who were stationed at Camp Lejeune, as well as others who qualify, to file a claim with the Office of the Judge Advocate General of the Navy’s Tort Claims Unit in Norfolk, Virginia.

A claim may also be filed on behalf of someone who is incapacitated – such as a spouse or adult child – or for someone who died from any of the diseases. The claims must be made by Aug. 24, 2024.

Not all areas of Camp Lejeune were serviced with contaminated water, but two distribution systems that fed Hadnot Point and Tarawa Terrace carried toxic chemicals and carcinogens in drinking and bathing water. Those areas included barracks, family housing, daycare centers, schools and workplaces.

Camp Lejeune Legal, an association of law firms working together to pursue federal claims under the CLJA, recently hosted a town hall on Hilton Head Island where attendees heard how the water contamination impacted one retired Marine and the adult child of another, and how others can file claims for themselves or their loved ones.

Retired Master Sergeant Jerry Ensminger was stationed at Camp Lejeune in 1977, living in Tarawa Terrace. Just as he received orders for drill instructor school at Parris Island, his wife, Jamie, learned she was pregnant. Because the schooling was temporary, he couldn’t move his family until he graduated and received permanent change of station orders.

So, for almost the entire first trimester of Jamie’s pregnancy, she was exposed to contaminants.

Six years later, the couple’s daughter, Janey, developed a high fever. Nothing worked to lower it, so on a Sunday he took her to the naval hospital on base.

“Luckily my battalion surgeon had duty that day at the urgent care. First, they had us go down to the lab and they drew blood. And then we sat, hour after hour,” Ensminger said.

After what seemed like an eternity, the doctor came out and said, “We’re waiting for the head of pediatrics here at the hospital. We’re pretty sure your daughter has leukemia.”

Two and a half years later, Janey died, the couple got divorced, and when he got ready to retire, Ensminger bought a small farm just north of Camp Lejeune where he was in the same TV market as the base. That’s how he learned from an evening newscast in August 1997 that a public health assessment from the Agency for Toxic Substances revealed that Camp Lejeune’s drinking water was contaminated.

After years of questioning how his daughter got leukemia, he told the audience, he finally had a glimmer of hope that he would get an answer.

Mike Partain was born in Camp Lejeune. His father was an officer deployed to Vietnam. When his father came back to the States and was due to rotate back to Camp Lejeune, Partain’s mother said she did not want to go back, so his father took a job in Florida. The family moved there when Partain was four.

At age 39, Partain was diagnosed with male breast cancer. As unusual as it is, the family didn’t research how he got it. There was no history in his family and he did not have the genetic indicators.

“One day Dad happened to turn on the TV and saw Jerry testifying to Congress. He talked about the children born between 1968 and 1987, and how they were being exposed to toxic chemicals. My birthday is Jan. 30, 1968, and that’s how my original story started,” said Partain.

“I got in touch with Jerry through congressional staff at that hearing, and he called me back on the day I was about to receive my first chemotherapy treatment. That was in 2010.”

The documentary “Semper Fi: Always Faithful” portrays Ensminger’s efforts to bring justice to those who served on Camp Lejeune. Both Ensminger and Partain have testified before Congress.

They were joined by environmental consumer advocate Erin Brockovich, who helped push into law the Camp Lejeune Contaminated Water Act that was signed in 2012 when they were guests at the White House.

They were also present this past August when President Biden signed the PACT.

“Semper Fi: Always Faithful” is available for viewing on Prime. For more information on how to file a claim, visit camplejeunelegal.com or go to jag.navy.mil and search for Camp Lejeune Justice Act.

Why it's necessary to consider using separate share trusts