The car radio has been mostly off since Christmas music stopped playing a few weeks ago. The music stations have far too many “new car” and “payday cash” commercials. Talk radio is all politics and Covid, neither of which I can tolerate.

But one recent afternoon while running errands I flipped on the radio to NPR, where I heard some confounding yet empowering news: Your clutter carries a message – and if you want to be successful in decluttering, you must listen to and understand the message of your mess.

I had to stop and listen to the conversation, and later I looked up the show on npr.org.

If you’ve read this column a time or two, you might recall that I have a bit of an issue with clutter. Year after year, I attempt (again) to rid my environment of things I don’t really need but can’t seem to discard, and to organize what’s left.

I have had some success – including emptying an entire closet and clearing out a bedroom to create my home office. I took three trunkloads of “stuff” to thrift stores.

But back to the radio show. The interviewer was speaking with Star Hansen, a professional organizer and “clutter whisperer.”

Hansen says that clutter speaks to us because “we are talking to ourselves through our clutter.” What becomes our clutter and where it accumulates says a lot about what’s going on with us.

“Everything you hold on to has a connection to your psyche,” Hansen said. There’s a lot of emotion attached to our mess. That’s why it’s not easy to just get rid of everything.

That years-old blazer hanging in the back of your closet might be telling you that you miss your former profession. Sauce packets and chopsticks in the kitchen drawer speak to your guilt about waste and sustainability.

Whether it’s clothes, the junk drawer, a pile of books or boxes of memorabilia, clutter causes chaos in our lives. And that ongoing chaos can make us feel bad about ourselves.

When I got home, I looked around at the clutter in my office. Most of it is there because it had previously been stored in an unused bedroom. When a child moved back home, the boxes of stuff had to go somewhere, and the office was the most available.

Once a few boxes were stashed, it was easy to stash a few more. The only area that stayed untouched was my work desk.

As I sit and type at said desk, I consider what message my mess is trying to send me.

The box of beading supplies in one corner might be telling me to spend some down time being creative rather than watching Netflix.

The boxes of books are shouting at me to read more! And to get serious about finding suitable shelving to store them properly.

My sweet little sewing machine is crying for attention. It has been covered for several years to keep the dust off, but it needs to be used. Maybe I should use some of the fabric that is also stored here and make something.

Hansen suggests that we give ourselves permission to spend as little or as much time as we decide on decluttering – whether an hour or a day or five minutes. Whatever time we spend, if we focus on getting our belongings organized, we will have made things better.

I should be able to find at least five minutes, right? 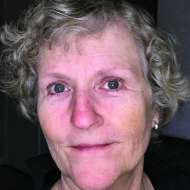 New to town? Learn more about us in free programs