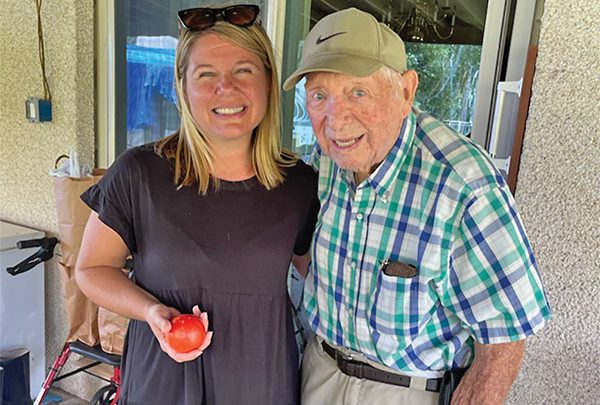 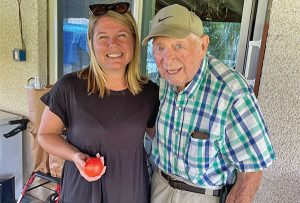 Bubba Crosby visits with a longtime family friend, Elizabeth Lassiter, on a recent afternoon on his porch in Pritchardville, where he sells tomatoes. TIM WOOD

Bubba Crosby never fashioned himself a viral sensation. He has spent 92 of his 94 years on Earth on the same plot of land, a mile or so down from what is now the Savannah-bound side of the New Riverside roundabout off S.C. 46.

“I’m a farmer, this is my land right chere. I love my tomatoes and I love sharing them with whomever wanders onto my front porch,” said the patriarch of the Crosby family farm. “I used to work 300 acres of this land back in the day, just like my daddy and my granddaddy. Now, I plant three rows of tomatoes on an acre. I talk to folks, sell the tomatoes. I take a little nap until the next customer comes along.”

Thanks to a social media blitz by Cheryl, the youngest of his four children, Bubba has taken over Facebook feeds far and wide across the Lowcountry. One look at the nonagenarian’s inviting smile holding his prized red beauties, and it’s hard not to fall in love with both the man and the tomatoes.

“I’m just so proud of him, I just wanted to spread the word,” Cheryl said. “It’s not about money. I just want folks to know him, to taste his tomatoes, feel the pride he’s put in to his work for so many years.”

The Crosbys are a farming institution. Bubba’s father bought 400 acres of land along the New Riverside tract. Bubba remembers sitting in his yard in the 1920s watching construction workers plow the road to construct what would become S.C. 46 and a stretch of land known as Freedom Highway.

“Daddy divided that land up among me and my siblings. I got about 80 acres, gave 40 of them to conservation. It was plenty enough to work. The work was always there. The land provided, just had to work it,” he said.

He starting farming in 1947 after two years in the Army. He met his soul mate, Joyce, when her cousin (one of the OG Pinckneys) wanted another couple along on her blind date. The date’s friend, Bubba, showed up and it was kismet.

“His Daddy was a bootlegger, my Daddy was Revenue,” said Bubba’s 88-year-young wife of their Romeo and Juliet romance. “His Daddy was trying to outrun my Daddy, and Bubba was always tracking me down. I went to business college in Jacksonville and he’d come to see me.”

The couple dated for three years before marrying on New Year’s Day 1953.

So Crosby set out doing what was in his blood to support a wife and the newborns that followed. He planted endless hundreds of acres of tomatoes from Hilton Head Plantation to Oak Forest on Saw Mill Creek, from his own tract in Pritchardville to Red Bluff Plantation on the Hardeeville-Savannah line.

“I used to farm big time, grew cotton way back. Then we turned to watermelons, tomatoes, cukes, squash,” he said. “We sold truckloads to the North. Later, I planted and sold a lot of roses and daffodils. Whatever the people wanted.”

Crosby would drive his truck to Hardeeville, Savannah and Ridgeland, selling fruit and produce right out of his truck to start. His operation grew bigger over time.

“We did 40,000 pounds worth of truckloads at our height. Most I ever got was three-quarters a cent per pound back then, most were a half-cent,” he said. “But boy, I had rusty tractors, I had some shiny big ones, but it was a lot of pushing dirt and praying for good growing.”

Our conversation was frequently interrupted by both long-time and his newest fans, who saw Cheryl’s post that has now been shared by thousands on Facebook groups like What’s Happening in Bluffton and Bluffton/Hilton Head Ask and Answer.

One of the day’s visitors was Elizabeth Lassiter. She grew up just minutes down the road, where her grandparents still live. Now living in Huntsville, Ala., with her pastor husband and kids, Lassiter had to stop by the Crosby porch while back in town.

“I just had to get my tomato fix. I’m longtime friends with your grandson, Blake, Mr. Bubba,” Lassiter said upon gazing at the table of tomatoes before her.

Lassiter told of her days playing softball for Hilton Head Christian Academy and the shocking losses suffered thanks to Bubba.

“Mr. Bubba’s softball team came to play us. He must have been in his 70s by then and I still remember him cracking home run after home run off of us,” Lassiter said.

“Well, we tried to take it easy on you. We tried to groove some pitches, but I just can’t stop hitting,” said Crosby, who played organized softball until his knees had other plans at age 79.

The conversation took us down a whole other rabbit hole, as Joyce motioned daughter Karen to go grab a plaque from inside the house, an Army athletic award given to Bubba, known as the proper “Richard” then, as Western Base Section Baseball Champions in 1945.

“I had a little game back then, this paper right chere, those were good times,” Bubba said. “There have been a lot of good times right here, too.”

Lassiter promises to bring her grandmother by for a visit before heading back to Huntsville. She exits the porch with a bag full of plump perfection and a few smaller, less saleable but still plenty delicious gems – free of charge from Bubba, a thank you for the walk down Memory Lane.

“We can’t drive the cars anymore and we all stay close to home due to this corona,” Bubba said. “But our kids, all these folks buying the ’maters, they bring the world to us. That was fun remembering wilder times.”

Bubba and Joyce are a living history of the corridor, from the times when crickets were more plentiful than people, to the current population boom. He’s proud that his family has all stayed close by through it all.

Cheryl, the youngest of their offspring at 55, lives around the corner on S.C. 170 and comes over every morning to make the couple breakfast.

Janice and Ricky live on property, Ricky a longtime farmer himself.

Karen lives down the road across from the Cahills and is over every day to help cook and clean.

Janice and a number of grandkids plan to build houses on the property when the price of lumber gets reasonable again.

“I have these amazing kids, nine grandkids, four great grandkids. A pretty nice life. We got a baseball team to field and then some,” Bubba said.

Crosby cans about 20 quarts of the juicy delights for the family and sells the rest of his three rows worth of crops. By the time you read this, the tomatoes will likely be gone for this season.

Bubba and Joyce will still be on the porch ready to chat if you want to stop by. New friends always welcome. And don’t you worry. Bubba plans to be back every summer with his tomatoes as long as he can plant and pick ’em. 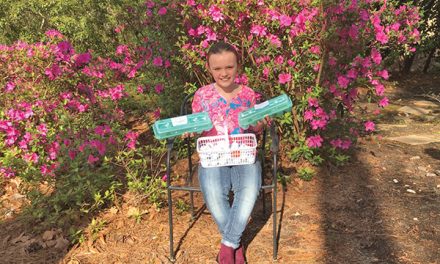 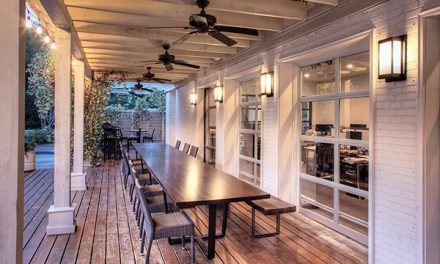 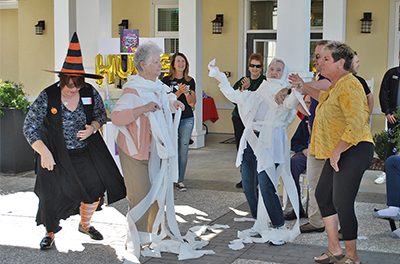