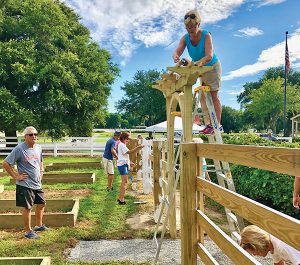 Atop the ladder, Joellen Harche paints an arbor gate (also designed and built by the Oldfield Volunteer Corps) this past July, while fellow volunteers paint the fence. NANCY GORR

When the students at Thumbs Up Children’s Center in Bluffton return in 2021, they’ll find new, colorful desks, courtesy of a local community’s volunteer group.

The Oldfield Volunteer Corps is composed of residents from the Bluffton golf community of Oldfield. The desks are a recent outreach project from the group that started out as “just a bunch of neighbors” helping the community’s naturalist.

Group organizer Marc Gustafson said about 15 people showed up that first day to do various projects.

“Some of us had backgrounds working with nonprofits and doing volunteer work. … So a few us along with the naturalist at Oldfield decided to have a volunteer day,” Gustafson said. “That was the genesis of our volunteer effort at Oldfield, and that was just a half-day event.”

It wasn’t long before members of the group figured out that they had a number of valuable skill sets and abilities that could take the one-day volunteer effort a step further.

Over the next year, Gustafson said, the effort continued to grow. “There were more projects, more volunteers, so midstream we realized we needed to get organized,” he said.

With resolutions from two Oldfield boards recognizing the Oldfield Volunteer Corps as an autonomous group, participation and the list of projects grew, especially with a lot of new residents.

“Like a lot of communities right now, 50% of the residents have lived here five years or less. They’re looking for ways to be active, to contribute and yet stay safe,” said Gustafson. “I think it was the motivation of the people in the club that brought it all together.”

He said the members began looking at how they could not only help their community but other enrichment programs and organizations of people with special needs.

“We did the handcrafted American Flag project and we sold those out in a couple of days. All the proceeds went to Backpack Buddies and that kind of spurred our enrichment efforts,” said Gustafson.

One of those efforts was new desks for Thumbs Up, an educational after school and summer program for children, which was recommended by an Oldfield member.

“We greatly appreciated that because we have not always had enough desks in our place,” said Rosalyn Browne, executive director of Thumbs Up. “(The new desks) will be great and the children will love them.”

Within the Oldfield community, projects have ranged from a chicken coop to an enclosed garden plot, with the ideas coming from all directions.

“People come up to me daily, saying things like ‘I was down on the walking trail and there’s a fence that needs repair.’ Or I’ll get a call from the sports director about the stadium seats at the pickleball court that are in pretty bad shape. That will be the next project,” said Gustafson.

There is a playground for the neighborhood children, complete with a row boat, swings and a bait and tackle shop. The workers were treated to lunch and supervised by the playground’s future “clients.”

Run-in sheds at the equestrian center were repaired and painted. Oyster tables were repaired, new ones built and all topped with upside-down metal buckets as lights.

There’s a new garden with raised plots and a white fence, a hay manger and a rolling bar – available for residential parties.

“We used to do a couple of projects a month. Now we do a couple projects a week,” Gustafson said, laughing. “Some of these projects are pretty involved. We replaced a deck that took more than 1,000 hours of work and had 40 to 45 people out there working over a number of weeks.”

Upcoming projects include Adirondack chairs, with proceeds going to another as-yet-to-be-determined enrichment project. The dog park is getting a spruce-up as well as an agility course and dog-washing station with an enhanced place for humans to sit while their canines cavort.

One of the largest proposed projects is the Oldfield Learning Center.

“This is an aspirational project,” Gustafson said. “We have two grain bins on the property, and our dream is to convert those into a cultural center where we would convert one into a workshop and one into an art studio, join them together and have a series of outbuildings around.”

“Our goal is, we want every community resident to participate in some way. We have five or six different age groups, and some can’t do physical things, but there is always something people can do,” he said.

Other communities have modeled similar groups on Oldfield’s OVC.

“We’re more than willing to share our program with anyone because we thinks it’s good universally,” said Gustafson. “I would suggest they come and see what we’re doing. I think the pride and unity that members are getting from doing the work is priceless.” 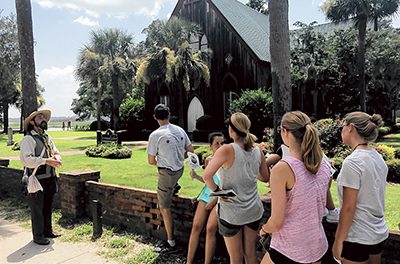 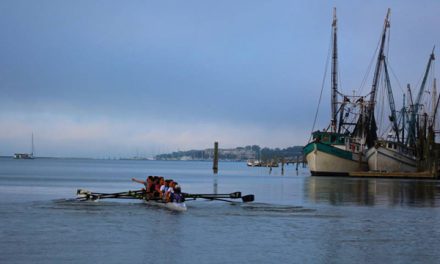 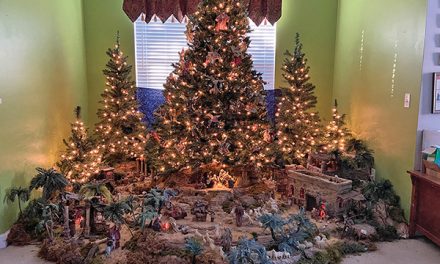 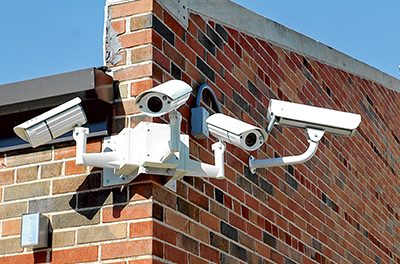