Ready for some football? Our ultimate guide on where to watch 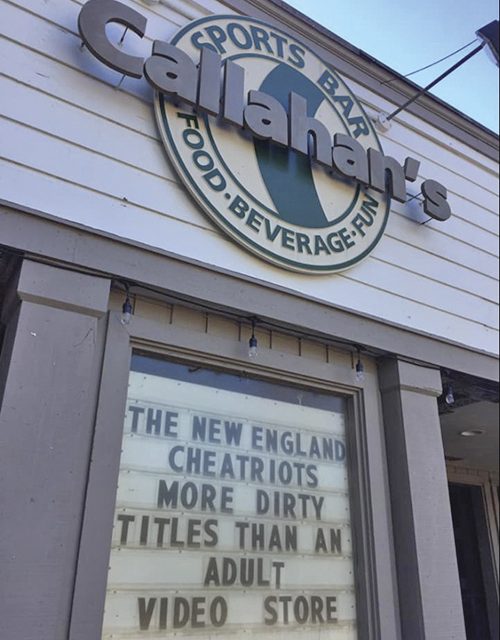 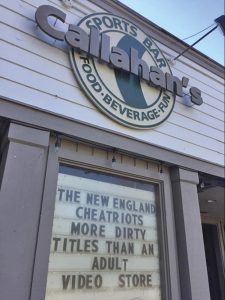 Callahan’s, famous for being a Steelers HQ, is more infamous for their message boards and their open disdain for the Patriots.

I am a diehard football fan. When we first moved to the Lowcountry,

I knew we were moving into the heart of college football fandom heaven. There would be no issues finding fans to huddle up with to watch games.

On Sundays, I have become an “NFL Redzone” addict. During the pandemic, we were all forced to enjoy games in solitude, making host Scott Hanson feel even more like my adopted big brother. Sorry, folks, Zoom meetups to watch games just didn’t cut it.

This fall, I’m hearing an excitement to get out and watch football that I haven’t felt here in a decade. Yes, it’s cheaper to stay home, but watching football at a bar with a group elevates the experience.

As much as I love watching a game in stadium, I’m steadfast that especially since the advent of high-definition TV, a bar seat is the optimum fan enjoyment zone.

Yes, the fantasy fanatics are constantly checking their phones and bragging or complaining about their roster. Not all change is good, but during the same time that fantasy has proliferated, there has been an equally massive increase in the number of places that cater to football fans with technology and menu specials.

I can’t believe I’m saying this, but there are almost too many options this fall. But, as they come through with any topic, our blue ribbon panel of readers and online commenters has helped us define the standouts for optimal pigskin viewing.

We’re going to give recs by location and for specific pockets of fandom, but there are a cadre of spots that give some kind of elevated experience for football fans.

• Callahan’s Sports Bar (49 New Orleans Road, Hilton Head Island) is the OG watering hole here. You’re not going to find the latest definition of TVs or the most comfy seats here, but you are getting quintessential pub food with a diehard fan atmosphere. It’s a dive bar that has a clear-cut personality filled with a crowd of regular characters, many that have been frequenting the spot since it opened. It is the “Cheers” of the Lowcountry for my money, the closest you will find to a neighborhood haunt where everybody knows your name – and during a time of immense growth and a flood of newbies, that familiarity breeds a hominess that is as comforting as a down throw blanket on a late-season Sunday.

• R Bar (70 Pennington Drive, Bluffton, RBarBluffton.com) is a slightly more evolved mainland version of Callahan in all the right ways. Their food has been featured in Hot Spots multiple times, but the football atmosphere might be even stronger than their Southern comfort food menu. We have been watching football games here since it was the original Bluffton home of One Hot Mama’s. The R Bar era has raised the potential for pandemonium reacting to the biggest plays by leaning in hard to their regional biases (more on that later).

• Frosty Frog (1 North Forest Beach Drive, Hilton Head Island) is the perfect locale for those looking to marry football with the chill vibe and people watching magic of the island. It’s an open-air touristy spot in Coligny Plaza adjacent to the beach that attracts plenty of locals to watch the biggest games. Frosty’s drink specials and unique pizza flavor combinations are the perfect compliment to a top-notch viewing layout with perfectly placed TVs.

• Southern Barrel Brewing Company (375 Buckwalter Parkway, Bluffton, southernbarrelbrewingco.com) is our top pick among the newer football hot spots. The layout is optimized to accommodate both foot traffic and a crowded bar-area contingent. There are TVs at every eye angle in a bright, modern décor. It still looks new several years into its existence, a testament to the dedication of GM Michael Hodge and his crew family who are masterful at making both newbies and regulars feel like the most important fan in the house.

Best to root for your team

Many gaggles of fervent fanatics have claimed one bar or another as their spot to watch around the Lowcountry.

Bills fans can get their beef on weck at R Bar, with Buffalo native owners setting the tone for Bills Mafia. The place was as raucous in the lean years as it will be this fall as Josh Allen and company start the season as Super Bowl contenders.

The eternal optimists that are Browns fans have a home at Street Meet (11 North Port Royal Drive, Hilton Head Island, streetmeethhi.com) and a bonus with my personal pick for the best onion rings in the area. Bengals fans are also welcome too (it’s an Ohio spot, period), but the divergent paths of the franchises may cause some friction among fanbases this year.

No Packers spot? Jump and Phil’s was the Lowcountry go-to for decades before closing, but the Lambeau lovers are still in search of their next home.

Finding your college football crew is a really weird experience here. We are smack dab in the middle of the epicenter of the sport, and with so many fans, every neighborhood has a slew of garages converted into mancaves to host viewing parties. The most ardent Gamecocks and Tigers fans are at the tailgates.

But it’s not a complete blanking for certain fanbases. Southern Barrel has become a go-to for ’Cocks fans. Bulldogs Central is at Crazy Crab (two island locations, thecrazycrab.com), and O-H-I-O chants have been heard from Buckeyes fans for decades at Mangiamo’s (2000 Main Street, Hilton Head Island, hhipizza.com).

Buffalo Wild Wings has the playbook down pat for football. Yes, a chain, but they are masters at creating the most inviting football atmosphere. Katie O’Donald’s, Kelly’s Tavern, Cheap Seats and British Open Pub are the veteran mainland locales that continue to impress. Craft Kitchen is the most impressive of the recent additions, with a small but stellar menu and a slew of craft beers on tap and in the can. The Turn Grill at X-Golf in the Tanger Outlets has all the makings of a great football spot, but we reserve judgment until they get a full season in the books (Steelers and Ravens fans especially welcome there).

One Hot Mama’s, Captain Woody’s, Mellow Mushroom, Tio’s and Wild Wing Café each offer football havens on both the island and in Bluffton. 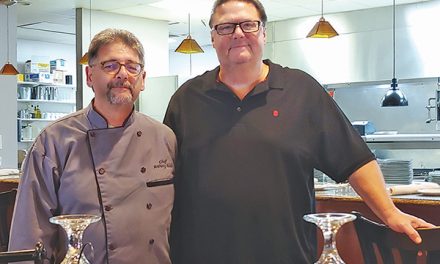