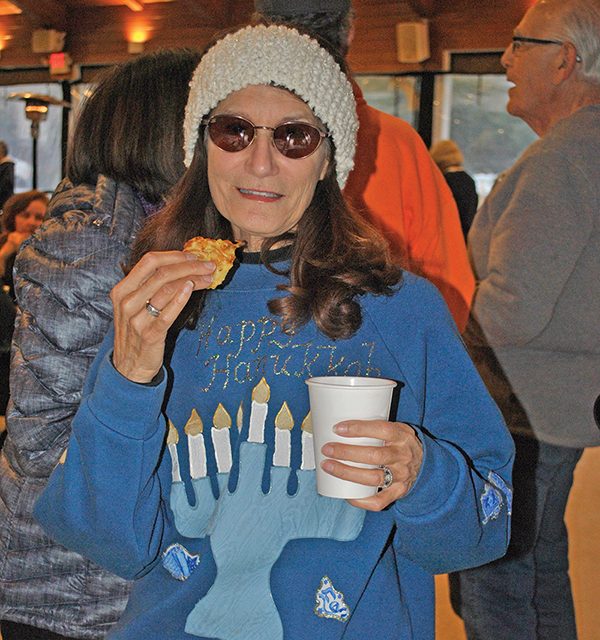 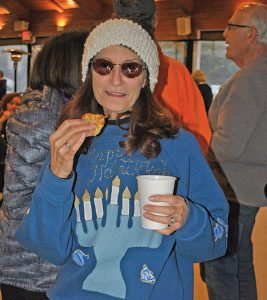 Sun City Hilton Head residents celebrated the second annual Lighting of the Menorah at a ceremony held in the community’s Town Square and Pavilion.

Presented by the Community Association’s Lifestyles Division, the event included a variety of music by The Bill Peterson Duo with violinist Vito Gutilla, plenty of the traditional Hanukkah treats of latkes, or potato pancakes, and jelly doughnuts, called “sufganiyot,” as well as hot coffee and apple cider.

Guests were also given dreidels – small spinning tops – which children often play with during the holiday. Song sheets were handed out prior to the start of the ceremony so the audience could sing along to familiar festive tunes including “Rock of Ages,” “Oh, Hanukkah,” and “I Have a Little Dreidel.”

The ceremony opened with Shalom Club co-chairs Hal Rappoport and Phil Wizwer thanking Lifestyles for its generous efforts for the celebration. Wizwer then explained to those both familiar with and new to the holiday that Hanukkah, also known as the Festival of Lights, is not a major Jewish holiday but an observance that commemorates the rededication of the second temple of Jerusalem. After reclaiming the temple following a revolt in the second century B.C., the Jews found only a one-day supply of the pure olive oil needed to light the menorah, or lampstand. The Jews used the oil that was there, even though it might run out and would take eight days to process more oil. Unexpectedly, the oil lasted eight days, long enough for a new supply to be prepared.

In remembrance of that miracle, one candle is lit on the menorah the first night, and one more each night until all eight candles in the menorah are lit.

Prior to the lighting, Mike Riegel and Phyllis and Jerry Steinberg sang songs of blessing, and Riegel sang his original rendition of “Oh, Hanukkah.”

“It’s awesome to live in a community that provided all the music, food and space for this special, joyful Jewish celebration of miracles,” said Diamond Riegel, Mike’s wife. The couple have lived in Sun City for 25 years. “A lot of work goes into that, and we’re very appreciative.”

Diamond said when they first moved to the community, “there were only maybe 10 Jewish people that lived here. Now there are so many more of us!”

Lifestyles Director Kayla O’Quinn Holmes was given the honor of lighting the first candle on the menorah, and the celebration of Hanukkah was officially begun.

“Lifestyles was very easy to work with, putting out the food and arranging for the entertainment,” said Wizwer. “The duo that played in the Pavilion were nice, and the food represented the two most prevalent foods enjoyed during the holiday because they were cooked in oil, and that has significance with using consecrated oil. It was all very well done.” 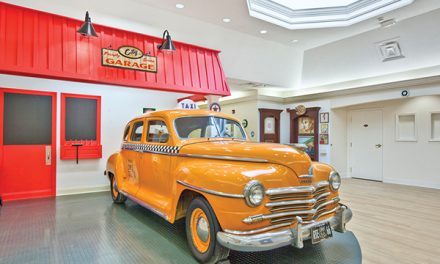 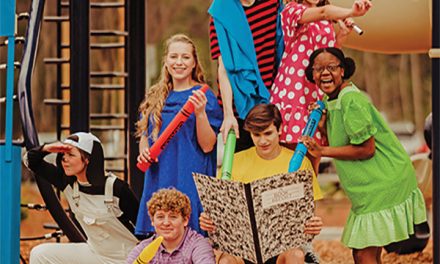