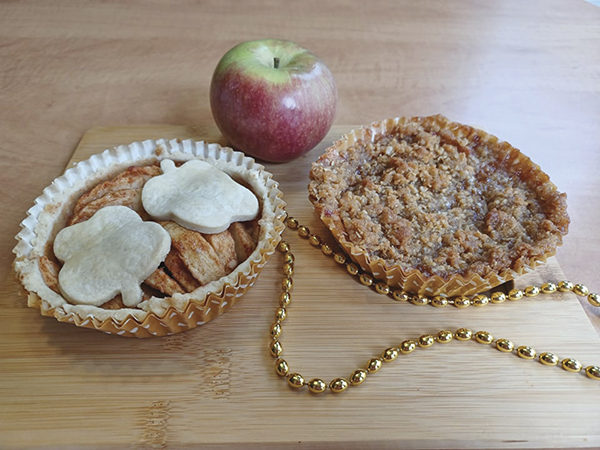 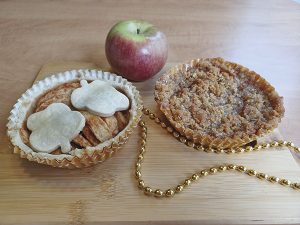 These two minis are the creations of Connie Dudek-Hoskins of The Speckled Apron. On the left is a traditional apple pie and the other is an apple crisp. COURTESY THE SPECKLED APRON

(Editor’s Note: This article is reprinted by popular demand from Thanksgiving 2021. To the best of our knowledge, all these entities are still making great pies. Call or check the website for confirmation of availability.)

Fans of these desserts are trying to figure out how pie became the go-to treat for our favorite holidays. The answer is quite simple. When the pilgrims came to America, they made it a mission to separate themselves from as many facets of British culture as they could. And dessert was one of the first differentiators.

Scones and bread pudding were quickly erased from the collective consciousness, replaced with a treat the Dutch immigrants had cooked up in the 1700s. The flaky crust and buttery gooeyness of pie was an instant fave, and the colonists used the abundance of apples the land provided to fill the innards.

There was a recipe for apple pie in what many consider to be the first known American cookbook, American Cookery, in 1796. Baking that pie on the Fourth of July became the ultimate raise of the nose to the Brits.

The colonists expanded their palate on the pie front a bit, but the dish became a staple of all the biggest American holidays from the early days forward. Sadly, cookies and cakes never stood a chance against patriotism.

We are blessed to have an embarrassment of riches in the Lowcountry when it comes to professional bakers who have taken old school recipes and added their own unique twists on classics. So as you scramble to solidify plans and menus for your holiday family gatherings, here are some suggestions on where to order the best pies for your guests.

We are going to avoid the superlatives for each one here in the interest of giving you down-and-dirty information. Safe to say, we’ve either tested their treats or they come highly recommended by our blue-ribbon panel of taste-bud experts.

Also, note that this feature is called “10 Hot Spots.” To honor the lusciousness we’re sharing, we’re giving you a Baker’s Dozen.

Mad Batter, Bluffton: Hampton Lake baker Kristen Barber just made her decade-long hobby an official LLC back in March and has been winning raves for all her confectionary creations. She has a full lineup of pies available for order via email at kmadbatter@gmail.com. That includes caramel apple with classic lattice or a crumb topping, French silk, Baileys chocolate cream, pecan, lemon mascarpone cream, blueberry/mixed berry and cherry. Deadline for ordering for Thanksgiving is Nov. 19.

Hilton Head Social Bakery, 17 Harbourside Lane, 843-715-3349, hiltonheadsocialbakery.com: This Shelter Cove favorite is offering a limited-edition pie menu for Thanksgiving that includes eggnog cheesecake, pecan cranberry tart, Grandma’s spiced apple tart, and a holiday pumpkin cream tart. Call the bakery ASAP, as they might be sold out by the time you read this.

Cahill’s Market, 1055 May River Road, Bluffton, 843-757-2921, cahillsmarket.com: The Cahill family does so many things well at both their Chicken Kitchen (hello, my chicken and waffles friend) and their market (with many of the fruits and veggies coming right out of the fields on the back of the land). Their pies are a Bluffton holiday tradition and this year, they have their delectable pecan and pumpkin pies available for order. Just make sure you get your requests in by Nov. 19.

The Speckled Apron, Bluffton, 727-688-7422: Connie Dudek-Hoskins is another home-based baker who has gained a following in town. She is offering apple, apple crisp, pecan, pumpkin, lemon meringue, cherry and coconut cream pies, as well as New York cheesecakes, in four flavors, decorated cookie sets and cocoa bombs. Email her at conniedudek@yahoo.com for ordering.

The Sugaree, 142 Burnt Church Road, Bluffton, 843-290-8585: Todd Rackliff and wife Jo have a full breakfast and lunch menu of delights now, but I first discovered them for their baked goods (specifically, an amazing banana bread that rivaled my Nana’s). They will have pecan, apple, chocolate cream, pumpkin, cherry and coconut cream available for Thanksgiving, plus they are also offering a full dinner spread option if you want someone else cooking for you. Just order by Nov. 20.

SweetCakes Bakery, 843-812-4153: The folks on the LowCoTri Eats group rave about pie magician Laurel Goodman. And they’re not alone. Southern Living declared her pecan pie the best in the South. SweetCakes provides all the pies for Lowcountry Cider and Superior Coffee on St. Helena Island and has a full array of pies available for order include pecan, salted caramel apple, cranberry orange chess, sweet potato praline and pumpkin. But order quick. These pies sell out every year.

Declan’s Delights, Hardeeville, 269-352-1239, declansdelights.com: This home-based baker has created a stir with a lot of social media savvy, including a photo on Facebook of their cookie tray available for Thanksgiving (see, cookies, I’ll give you a little love, too).

The Purple Cow, 24G Palmetto Bay Road, Hilton Head Island, 843-681-2253, purplecowhhi.com: We’re such fans of “Bernie,” aka Lisa Bernstein, a staple of the island F&B community who is now focusing on confections as an homage to her mom who passed away in 2013. She has an amazing lineup available to be sitting on your Turkey Day table. Pumpkin, apple, caramel apple, apple walnut or pecan, key lime, coconut cream, chocolate pie, pecan and chocolate pecan and peanut butter, as well as a PieCakey (spice cake with a snickerdoodle and caramel apple pie inside). Tight deadline here though, and Bernie’s selling out fast. Order by Nov. 17.

Sassy Sweets 843 Food Truck, 843-263-3891: If you’re looking for a last-minute solution that isn’t a big-box chain store, Shawnetta has you covered. She will have an assortment of pies and cobblers available the day before Turkey Day on the truck. Just follow her on Facebook or Instagram @SassyTreats843 or email sassysweets721@gmail.com to order in advance.

Bess’ Delicatessen and Catering, 55 New Orleans Road #112, Hilton Head Island, 843-785-5504, bessdeliandcatering.com: Bess Soper is an institution on the island and in Bluffton, and Bess’ is celebrating its 40th year of feeding locals and tourists. They offer a full assortment of main dishes and sides for Thanksgiving, too much to list here. The pie menu includes pecan, key lime, pumpkin and apple. Have orders in by Nov. 24.

The Cottage Café, Bakery and Tea Room, 38 Calhoun St., Bluffton, 843-757-0508, thecottagebluffton.com: The list of awards that Leslie Rohland and her team of culinary geniuses have won is overwhelming, but it’s not just about the entrees. The bakery is equally impressive and the creations just as mouth-watering. The regular menu features 20 different pie varieties that you can order with plenty of notice, but the Thanksgiving menu is focused on Key Lime, Cherry Lattice, Chocolate Cream, Berry Apple Rhubarb along with apple, pecan and pumpkin. The Cottage is also offering a full-course meal pickup if ordered by Nov. 23 at noon.

We’re going to promote local bakers first and foremost, but we’re lucky to have some really strong options on the chain side just in case you procrastinate on the ordering and miss out on our homemade options. Cracker Barrel, Publix and Kroger all offer above-average pies in bulk. 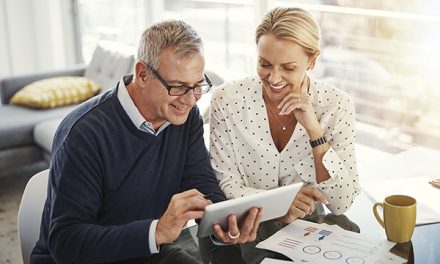 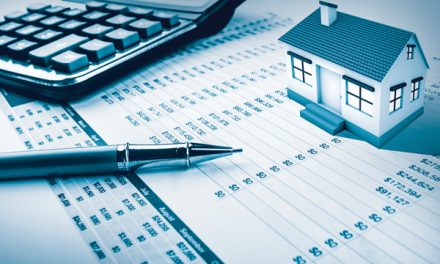 Is using IRA to invest in real estate a good strategy?